I was saddened to learn of the death of PSH.  Yes, it is very tragic.  Yes, I wish that heroin use and overdose deaths of regular people would get this much attention.  Our kids, our neighbors, our loved ones, our friends... It would be great if we could all speak up and say, yes this happened to someone I loved, I knew him/her, I knew his/her parents....

I am getting to the age where I read the local obits.  Every time I see a young person around my sons ages that "died suddenly" or "unexpectedly" I wonder if it was an overdose.  According to my brother, a local law enforcement officer, it happens often.  I don't know that I've ever seen any mention of drugs or addiction in an obituary.  There is so much shame attached.

Tragic and sad yes, but it seems a much respected actor's death of an (apparent) heroin overdose has caused a lot of discussion of addiction this week.  The messages I'm starting to hear are 1) this happens, it can happen to anyone, young, middle-aged, old, rich, poor, famous or unknown and 2) addiction is a disease that has to be fought, not only by the addict, but by those around him/her and 3) we can be open with each other and hopefully gain support for the addicts in our lives, and ourselves.

I hope the discussion continues.

I have many things to look forward to this coming year...

Hopefully a new job.  I have been job hunting, although not much happening over the holidays.  It's weird being unemployed, but restful.  It's only January, and I am already sick of this winter.  I have been stuck inside a lot, don't want to spend money, and of course I'm not leaving the house for a job.  Did I mention that it's been very cold here?  yeah, like 11 degrees today, and single digits several days over the past week.  We're expecting below zero temps this weekend.  ok, sorry that went from looking for a job to some whining about the winter.

Assuming I start a new job in the next month or so, we want to go back down to Florida yet this winter for a week or so.

Son2 will hopefully be starting a new job next week. That will be so great for them, they really need to get a better car.  He had a car accident with the icy/wintry roads yesterday.  The car was totaled and so now they need to get something to drive before he starts his new job.  His wife, C and their new dog were in the car, I'm just glad no one was hurt.  Life is not easy for those two, but all in all, they are happy and I'm anxious to meet the new puppy.

Son1 and his wife just told us they are expecting, but sshhhhhhhh, it's a secret from the rest of the family for a couple months since she is not very far along.  I am so excited!!!!!

I leave you with this pic, taken on a warm day last week after cross country skiing.  It's been a lot colder since  ;) 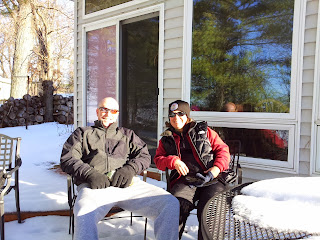 Last week was Son2's 24th birthday.  Yes, he is 24.  We were invited over to their apartment for his birthday party with his friends.  We picked up Son1 and he went with us.

As is in recent history, it was all done in Son2's way.  His friends are not mainstream, certainly not preppy, a mix of what some call hippy, edgy, punk and working class.  He did not provide alcohol, guests brought their own, but I didn't see hardly any, except the six that his dad brought. C had spent hours cleaning the apartment, the first floor of an old craftsman style house. She made food, and I brought food as well.  The have old furniture, couch covered with graffiti, a mix of edgy art on the walls, some his some hers.  They have really made the place their own.  Some people were there that came to the wedding, so we got reacquainted.  We were the only older folks, but everyone seemed comfortable, and Son2 wanted us there. No drugs, no pot, little alcohol. The only thing was that most everyone smoked, so the place really reeked.  He even had a small punk band playing in the basement, we left soon after (ha-ha, a little loud).

5 years ago I could never have conceived of this birthday, 24 years old, a college graduate and a wife.  A mohawk, piercings, tattoos, combat boots... living on his own, getting a job, getting parts and fixing C's car himself, troubleshooting his problems, figuring out how to live. They are struggling financially, but keeping their heads above water.

Is he totally independent?  Almost.  We still pay car insurance and cell phone.  I just gave him some cash to buy a car battery, but haven't given him rent money in about 6 months.  He is about to start a new job and then they want to start paying their own insurance.  C is fiercely independent.

A couple years ago, Son2 and I had a conversation about forgiveness.  I'm not sure if I got my point across, but I tried to tell him that saying he was sorry was not enough, and it wasn't going to happen all at once, but over time.  How he lived his life was the key.  I wanted to see him happy, healthy, and self sufficient.  And yes, time heals all wounds.

Well, 5 years ago on Thanksgiving Day, Son2 told us he was addicted to heroin.  I thought of that a couple of times last week, and just remembered it today.... but yesterday, Thanksgiving Day, I did not think of it at all, not even once.

Lots to be thankful for...

I've been unemployed now for a little more than a month.  It was weird at first, then we spent 10 days in Florida which was great.  I've interviewed for one job, applied for another, and have a couple more that I am considering going after. I don't know if I'm completely ready to go back to work, but I could if I had to now.  I'm starting to feel better, I am starting to recover from the burn out.

So, this week I decided it was time to tackle Son2's room.  We've talked about it since he got married, and I got his agreement that it had to happen, couldn't avoid it forever, I mean we can't leave it shut off from the rest of the house indefinitely.  For a long time, years, Son2 didn't want me to touch it, and in fact he would still sleep there when he came home.  He and his ex (K) used to sleep in there together when they visited.  But since he has been with C, he hasn't, they haven't.  So, I figured he was ready to let go.  I haven't done very much so far, picked up obvious trash, and picked up and sorted (and washed) clothing.  That in itself, took several hours.  It's dirty, stuff written on the walls, trash, etc all over, even food and half bottles of soda.  Disgusting?  Well, yes.  For those of you with teens or 20-somethings, I'm sure some of you can relate. I found empty prescription bottles, some with names of friends, one with my name, and one for the dog.... that was sad.  I knew it would be hard, but was still taken surprise by the feelings and the memories.  That was Monday, I think, and I haven't been back to it since.  Maybe today or tomorrow.  I know there are other things in there I don't want to see... not only reminders of the drug use, but childhood stuffed animals, favorite hat, track and soccer gear, downhill ski equipment, sketch books, etc. Reminders of things he used to love, but has since moved away from.

So, why on earth aren't you making him do this himself, you ask?  Well, I could. I have tried.  For one thing, he is rarely here anymore, he has moved out and moved on.  Also, I kind of think it is therapeutic for me, a review I guess, a goodbye. Does that make sense?  I plan on boxing up all his stuff for him to go through, stashing it all in the closet for now, clean, paint, and turn it into a craft/music/guest room. I know it meant a lot to him at the time to have a place he could call his own and he didn't have to share with his brother.   H says be sure to take pics of the "before" room.

Otherwise, it's been kind of quiet around the house.  I have a few other little house-cleaning projects that I've started.  Been spending some time job hunting, walking, resting, and I have to admit to watching a lot of TV.  I do feel rested now, for the first time in a long time.

In my previous post I said I would post about H's drinking, but I'm not really ready for that yet.  I will say he is a social drinker, and he's very sociable.  When H is "emotionally challenged", he drinks more.  After his parents passed away he drank a lot for a few months.  When I said I was leaving my job, he got stressed out and was drinking a lot.  What is "a lot"?  Well, more than usual.   He seems to have calmed down in the last few weeks.  I will be posting more about this in a future post.
Posted by Momma at 3:09 PM 2 comments:

Time for a change

I did something radical.  I quit my job, I took early retirement.  Too much pressure, and I was just plain burned out.  With both sons out of the house, out of college and married, seemed like a good time.  It was time... it was time...

But, I feel guilty.  H, my husband, is not happy about this.  He is very worried about our finances.  Not only does he think I need to work for a few more years, but he thinks I need to continue to make the kind of money I was making.

Well, the truth is, I don't know what I want to do.  But, I do know what I don't want to do.  I don't want to go back to the kind of job I had.  I am afraid that the kind of things I'm good at, are the very things I don't want to do, the stuff that burned me out.  Somehow, I have to figure out how to turn my skills into something I will enjoy doing, when all I am is tired of it all.  I need some time to think, which is what I'm trying to do this week.  Self evaluation, examination, quiet time, and rest, you know?   But, I'm feeling a lot of pressure right now from H.

Some of the things that I am thinking about are these


I know I have options:  working part time, finding a more meaningful job, etc,  etc, etc.  There are always options.  Just have to figure out what all they are.

Son2 is now a married man.  It was an amazing day, a day of joy for them and for our family and friends.


I am so thankful, for all he has overcome, to see him so happy, and for a wonderful new addition to our family.
Posted by Momma at 11:17 AM 8 comments:

Momma
I am a mother of two grown sons. Son1 is 27 and married. Son2 is 24, recently graduated from college, recently married, and a recovering addict. We live in Wisconsin.